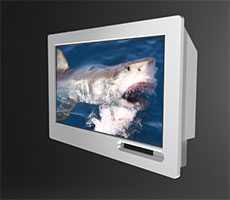 This is one amazing television! From sail boats, hot tubs, and motor yachts to marinas, and swimming pool areas, the Ciil UltraView Waterproof Television is the perfect choice for places where water is with the unique ability to keep water completely out, providing continuous and uninterrupted high definition (HD) entertainment for all to enjoy.

The UltraView 26” Waterproof HD Television is unlike any other on the market today, because it is fully-sealed with no openings whatsoever.  There are no filters and vents, making it impossible for any water, dust, bugs, or moisture to enter the television.  Absolutely nothing can get in it and nothing comes out of it. As a result, the UltraView Television can be placed in extremely harsh weather conditions and still function perfectly.  Currently there is no other television by any other company that can do what this one can do.

Ciil Technologies, LLC was founded in 2010 with a goal to go beyond what is expected and a desire to create innovative products that combine advanced technology, design, and creative solutions. With a lot of hard work and dedication, the company has introduced waterproof and dust proof televisions equipped with a patented Fully-Encapsulated Dynamic Thermal Transfer System, which keeps interior mechanisms safely warm in extreme cold temperatures and adequately cool in extreme heat, without any filters, vents, or exhaust fans, giving it the ability to be placed in very hot or very cold climates, and eliminating any water, dust, moisture, or bugs from entering it.

When putting a television outdoors, it is important to make sure that it can function well in harsh weather conditions and that is what the UltraView Television by Ciil Technologies can do.  The television is so advanced that it can withstand supercharged washing from any angle, be completely submerged in water and still function perfectly.

The UltraView Television is not only sturdy, strong, with great performance, but it is also attractive with a unique design that can fit well with a variety of outdoor décors and settings, including backyards, patios, stadiums, theme parks, hotels, and restaurants.

Because the television is made with an aluminum body, it resists rust and corrosion. The LED screen produces sharp, vivid, clear images, even in direct sunlight. There is also an impact safety glass that provides special protection for the display.

I have a Ciil UltraView Television in a white color.  It is a little heavy, so I needed my daughter to help me remove it from the box that it came in.  I am sure that a man or woman can lift it by themselves, but I needed a little help.

I do not live in a beach house or yacht by the ocean, nor do I have an outdoor swimming pool, but I know that if I did, the UltraView Television would be a perfect choice. I do, however, live in an area where it rains a lot at different times of the year and I do have a patio, which accommodates the television very well.

You do have to mount the UltraView on a firm mantle or backing, but even if you cannot find a place to mount it, you can place the television on something sturdy that can hold the television in place.

Here are some features of the UltraView:

I thought about getting a Roadtrek one day and I think that this television would be great in a motor home, because of its sturdy design, durability, and smaller size, which is suitable for travelling.  If you are a person that likes to travel and you are anywhere near water, such as an ocean, river, swimming pool, rain, snow, or even humidity and you would like to watch television without being concerned about it getting wet. I absolutely love the feeling of knowing that my T.V. will not malfunction if it makes direct contact with water.

The price of a Ciil UltraView Waterproof Television may seem a little high, but I would expect that for a television of this caliber. In my opinion, it is worth much more than any other flat screen television that is available today, providing features like no other and it is 100% waterproof.

My sister’s husband spent $4,000 on a flat screen television that is not waterproof and does not have all of the special features that the UltraView Television provides. Of course, when he bought his television, he didn’t know about the UltraView if he had known about it he may have bought this one instead.

I am very pleased with the UltraView Television.  It works perfectly, has a great design, is waterproof, and is the best outdoor television in the world.

You can find the Ciil 26” Ultra View Waterproof Television at http://www.ciiltech.com

Disclosure of Material Connection:
The Contributor has no connection to nor was paid by the brand or product described in this content.

rejoice4life
Philippa Lane is a professional freelance writer and is a staff member of the Cable Muse Network. She is a prolific writer and covers a variety of subjects, such as health, beauty, appliances, travel, food, books, and automotive topics. She loves Jesus and is a mother of a beautiful daughter. Take a look at some of her articles on www.plglobalreviews.com and http://ezinearticles.com/?expert=Philippa_Lane http://tinyurl.com/4o8a3h2

Is a small house better in saving electricity?